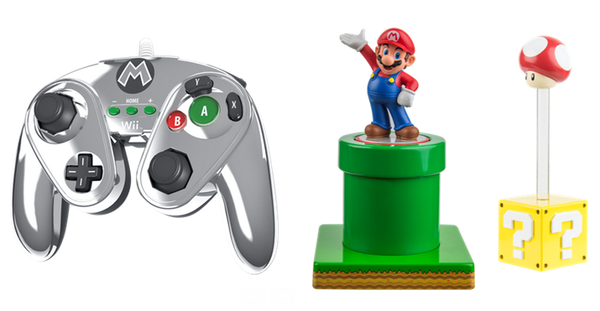 PDP is proud to announce that Metal Mario, Zero Suit Samus, and Toad will be joining the lineup of Wired Fight Pads for Wii U, making them the newest additions to the Classic Controller line inspired by the original GameCube controller. The Wired Fight Pad line also features fan-favorite Nintendo characters such as Mario, Yoshi, Princess Peach, Luigi, Link, Samus, Donkey Kong, and Wario.

The Wired Fight Pads will have an estimated SRP of $24.99 and are now available for pre-order at GameStop and Amazon. Both the Toad and Zero Suit Samus-themed controllers are available exclusively at GameStop in the United States.

PDP is proud to announce the release of a new line of officially licensed Nintendo products, featuring amiibo display stands to show off your favorite amiibo figures: The Legend of Zelda: A Link Between Worlds display set that includes a New Nintendo 3DS XL stand and a fully functional Master Sword stylus, and a Donkey Kong themed game card storage barrel with space for both Nintendo 3DS game cards and styluses.