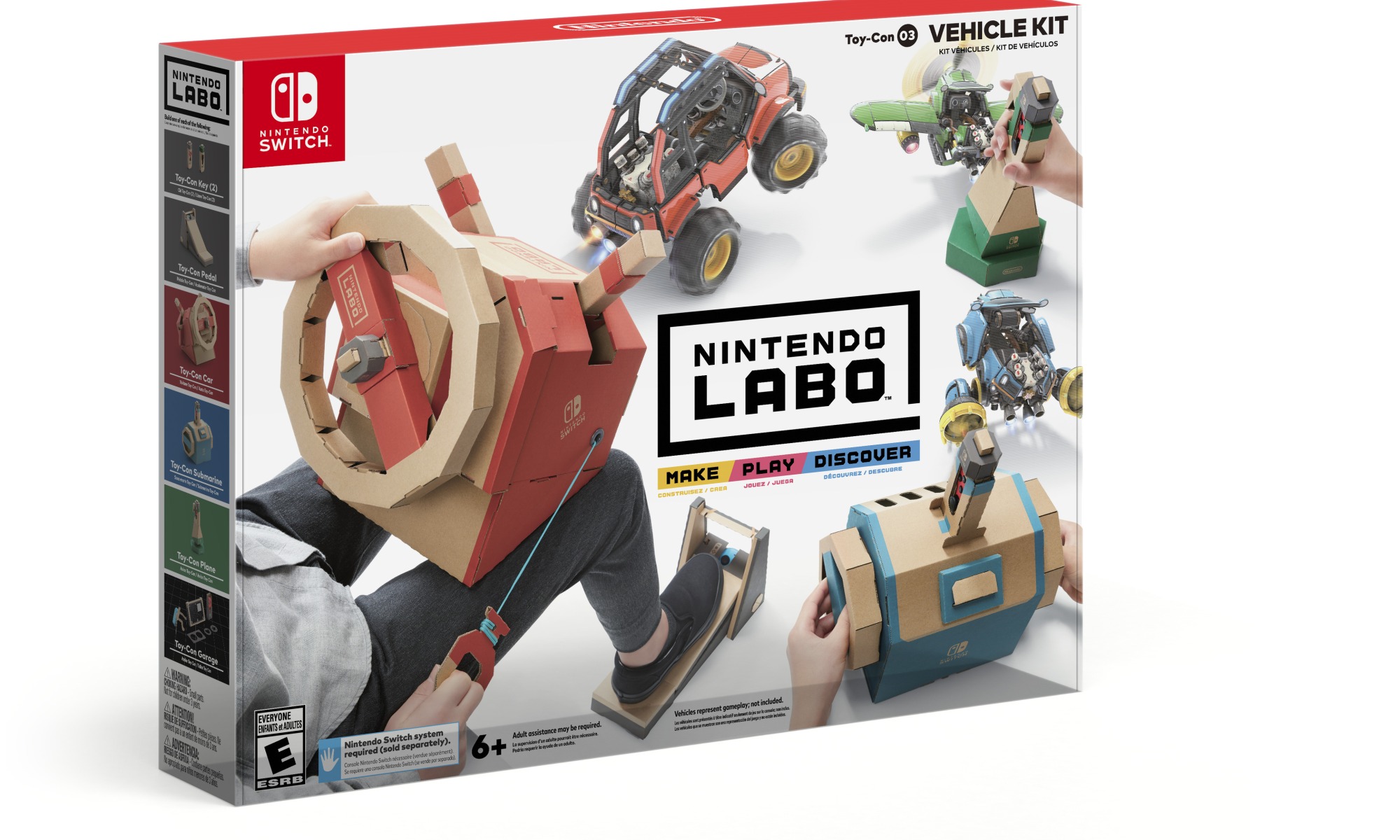 Start your cardboard engines and accelerate the fun with Nintendo’s third Labo kit. Hot on the (w)heels of Labo’s initial success, the Vehicle kit has us brimming with excitement. But are the vehicles all they’re cracked up to be, or is it the case of too much hot air? We put all three to the test…

It’s been a summer full of ingenious ideas when it comes to making things with Nintendo Labo. Fans have recreated a variety of songs on the Toy-Con Variety Kit’s Piano, including The Legend of Zelda: Majora’s Mask ‘Clock Town‘ theme, the Super Smash Bros theme, and even the Game of Thrones theme tune by the series’ composer Ramin Djawadi. We’ve even seen one very clever creator develop one of Game & Watch’s greatest games, ‘Fire’, on Labo incorporating some nostalgic sound effects. Plus, there’s also some unofficial third-party kits in the works, including this Switch Guitar. In fact, it’s pretty amazing what people can do with Labo when the creativity starts flowing. But what if you aren’t that creative? Instead, what if you just enjoy building Labo, designing it in your own way and playing on the games installed on the cartridge? Perhaps the best thing about Labo, is just how adaptable the kits and software are. And you don’t have to be a developer, a designer, a builder, or even a gamer to interact with it.

Priced at £59.99 / $69.99 is the third kit in the Labo series; the Vehicle. Straight out of the box, it comes with all the cardboard cutouts to create three vehicles – the car, the plane and the submarine. It also includes two ignition keys, a foot pedal and a spray paint can, so you can easily start your engine, control the speed, and create your own branding for it.

When it comes to making the vehicles, you’ll need to set aside around six hours to build all three, as well as the accessories. It helps if you have an extra pair of (adult) hands on board to do all the cardboard popping, duplicate folding and fiddly sections, though, which are the most boring (but essential) parts of the process. The instructions on screen are still as witty as ever, with some absolutely awful-but-you-love-them puns and amusing double entendres. At times, reading between the lines paid off with some cracking one-liners (that are NSFW) about ‘sliding it all the way through’ only until ‘the flap catches the hole’. No, seriously, I was pretty shocked too.

Picking my mind back out of the gutter, building the Toy-Cons and their accessories and seeing how they work for the first time is still the best experience you or your children will discover with Labo. The feeling of knowing all your hard work has paid off is something to be proud of. It’s an attitude that’s incredibly important to remember, especially for youngsters, knowing that it’s not the destination but the journey it took to get there. Labo makes all of us believe that creating anything is possible. This way of thinking is most apparent in the Discover section, whereby you can fix broken Toy-Con with household items and create new foot pedals with just an office binder and two sponges affixed to cardboard. The Discover section is like the Blue Peter archives, you can find almost every answer in there. And what you can’t find, you can make.

It’s a shame, then, that most of the game modes on the Vehicle kit are sub-par. Slot Cars utilises the foot pedal and gives you the ability to whizz around a circuit at full power and crash a couple of times, or control your speed for a quick finish. While Slot Cars can be played with up to four people, each player must have a Left Joy-Con and a foot pedal to play. On the one hand, it stimulates creativity to make more foot pedals but on the other it subdues the excitement with just one player. In a similar fashion, Circuit mode plays in much the same way, though it puts you in the driver’s seat in a first-person perspective. Yet it’s plagued with the same issue. You won’t need a bigger boat, but you will need additional pedals and wheels to get the momentum and adrenaline at peak.

Rally mode fares better and can be quite a challenge. Players will be pitted against the clock in a race to drive through ten checkpoints dotted across one area from Adventure mode. You’ll need to switch between the Car, Plane and Submarine to complete checkpoints, so it’s as frustrating as it is thrilling. On the other hand, Battle mode is more of a miss than a hit when it comes to playability. Either play with the CPU or bring an additional friend to the duel in the 1-v-1 mode. On a sliding platform, players are equipped with a car and a mega punch to try and dish out some damage, damaging their opponent’s car beyond repair or sending them hurtling off the board. While there are items that rain from the sky, including the ability to heal your vehicle or deliver a quick bolt of lightning to the opponent , Mario Kart style, there’s very little on offer in Battle mode.

Labo’s Vehicle Kit is best when viewed through the lens of Adventure mode. Featuring ten areas to explore, including the beautiful snowy mountains and tundra, the vast fields in the meadow and the rickety wooden bridges by the lake, Adventure mode makes it fun to drive, fly and swim around the world. There’s also some neat quests on offer too, so whether you fancy waiting ’til the cows come home and dropping them off in the paddock, or picking up some cheerleaders like in the movies, and wasting adequate resources by sawing down palm trees or firs and watching them vanish into thin air, you can do all of that and more.

It’s a pity that Adventure mode requires you to insert fuel into your car every ten minutes, though. It wouldn’t be so terrible if both the submarine and plane could refill too, but unfortunately that isn’t the case. Players must switch their ignition key from the submarine or plane back into the car and position it just right at the fuel station in order to fill up. Talk about unnecessary, when all you want to do is see the world. However, the addition of the radio on the car is a super sweet touch, especially when the music changes to the area you’re in at the time.

If you fancy yourself as a pro at the wheel, it might surprise you just how clunky the controls are in Labo’s Vehicle kit. Although the car is miles ahead in terms of usability compared to its peers, it still feels slow to accelerate and can be a pain to position at the fuel station. The plane’s joystick with its inverted controls is smooth when going up or down, but its issues rely on turning (or overturning). Thankfully, you can engage Star Fox mode and do a barrel roll. If it’s controls were easier to master, we’d suggest its inclusion in Starlink: Battle for Atlas. Yet it’s the submarine that really blows. Controlling it with the Toy-Con gear box means you’ll have two wheels which act as the in-game propellers. It’s superb when skimming across the water, but when submerging it’s slow, unwieldy and frustrating. Strangely, it’s actually easier when one person is controlling the foot pedal and the other is turning the submarine’s propellers and using its grappling hook to open treasure chests.

As Nintendo announced earlier this year, the Vehicle kit can be used with Mario Kart 8 Deluxe on the Switch. For youngsters, playing with their very own car accessory is probably incredible. But for adults like me, well, it’s a different story. There’s no brake or reverse function, you cannot throw items backwards and you’ll automatically drift on a corner. It may just be my ineptitude of using a wheel and foot pedal instead of a Pro Controller, but switching from the clunky controls in Adventure mode to the swift and smooth ones in Mario Kart 8 was too much for my poor brain to handle. Let’s be frank, I was over-steering and cursing a lot. It’s a shame, as  using the Toy-Con with another Nintendo title is something I’m definitely on board with. From now on, I’ll stick with the Pro Controller (and possibly the MK8 wheel if I’m feeling merry).

While the Vehicle kit is no show-stopper, Nintendo Labo is still surprising us in very fun and clever ways. It might not be everyone’s calling, but there’s no limit to creativity. We just can’t wait to see what’s next.

A review copy of Nintendo Labo: Toy-Con #3 Vehicle Kit was provided to My Nintendo News by Nintendo UK.

You can also view our previous Nintendo Labo reviews of the Toy-Con Variety Kit and Robot Kit, here.