Many things have changed since I was last at school and college. iPads are often given to students on arrival as an educational aid whereas, if I was lucky, I’d get treated to a brand new pencil case from my parents. Two decades ago, we just had WordArt and the googly-eyed Paperclip, and even that was limited to IT lessons only. Now I work a standard 9-5 office job and, although it allows me to think on my feet, it rarely stretches my academic skills. Back in school, Maths was my weakest point. So I’m prime-time fish food for Dr Kawashima’s Devilish Brain Training. Let’s hope I don’t completely suck…

Technically the game launched over four years ago in North America as Brain Age: Concentration Training. However the brain-teaser only launched a few days ago in Europe on the Nintendo 3DS and, since I played the original DS title a decade ago, I (foolishly) thought it would be an interesting idea to perform an experiment; to push my logic and train my brain during an abnormally hectic period of time. The job that allows me to eat and drive my car, feed my cat and give me the means to see friends and family is especially taxing. Between meetings, deadlines and a promotion on the horizon, it means that my spare time is precious. So I set out a clear goal; sticking to a schedule, to flip open my 3DS whenever I could, and to get my brain age higher than when I started – in just seven days.

Dr. Kawashima’s Devilish Braining Training, unlike its predecessors, focuses on grades rather than a calculated ‘brain age’. You start out at F grade and the more training you complete the higher your grade climbs. With my frustrating Monday at work behind me, I fired up the game and the first training exercise that Dr Kawashima puts you through, to my absolute dismay, is Devilish Calculations. Here you are required to write down the answer to the previous equation, while the game gives you another simple maths problem. You begin on ‘1-back’ difficulty that means you only have one equation to remember. With sweaty palms and a slightly faster heart rate (presumably not from the coffee), I breezed through and got 95%. The Dr reminds me that we only have to do five minutes of training on each exercise and ups the difficulty as I did so well. 2-back difficulty ensued. I stumble, panic and go back down to 1-back difficulty. Getting back into the rhythm, I focus and relax. Back up to 2-back, the timer chimes and it’s over but without much time to breathe, my suggested brain age gets revealed and I hope for the worst – 70 years old.

You can only tackle each exercise once a day for the allocated five minutes but then you’re free to move on to different exercises until you’ve completed the necessary time. While you’re given other modes to play, my main focus was to improve with the Devilish training exercises. I did, however, use the wind-down games and tested the water with some of the other features. There are a fair few training supplements such as Brain Training’s Calculations x20 that can aid you and new Brain Training exercises that include Klondike, a classic solo card game. Time Out games are there to help you unwind and relax, in contrast to the rest of the game, with Blubber Blast being a simple game in which you match bombs to blobs and blow them up. Over the seven-day period, Blubber Blast became a firm-favourite exercise.

As the week rolled on, stress levels rose as well as the stack of paper in my tray. I decided to clear 20 minutes of each evening, shutting out all distractions and really focussing on my exercises. My performance was often influenced by my current frame of mind. Dr Kawashima’s floating head offers up a seminar every now and then to teach you how the game can increase productivity and to help you focus on the task at hand. I paid close attention to these before training and, to my surprise, it motivated me to carry on.

I quickly got to grips with the other five-minute segments of Devilish tasks and was in a decent routine after returning from work. Devilish Pairs threw a bunch of cards on the touch screen and had me pairing them up. Just like in Devilish Calculations, the better you do the harder it becomes. My short-term memory was surprisingly sharp and this exercise quickly became one of my favourites and one that I proudly excelled at. With my newfound confidence, over the next handful of days, I started my training with Devilish Pairs. I quickly found that this wasn’t the best way to go about things.

My ability to get above level 3 was proving to be near impossible in Devilish Calculations. Being my weakest subject in school, coupled with the need to keep up with the clock, it forced me to show this exercise the back seat. This served as a harsh reminder that I should have listened to my parents back in the day and attended some extra lessons but hey, we’ve always got a calculator on us which doubles up as a phone…

Devilish Mice was introduced around day four. I found that clearing my head with some soothing music on my car radio on the way back home helped matters, I felt as if I was getting into the swing of things. Devilish Mice proved to be a walk in the park, for now anyway. Staring at a 3×3 grid of panels, some mice were revealed and then shuffled about by some pesky cats. Shuffling stopped; I had to pinpoint where the mice were located. As I progressed in this exercise, the Dr. made sure to add more panels into the exercise, with more mice to locate behind them. The speed in which the panels moved drastically increased, which had me knuckling down even more and forcing myself to really concentrate. I quickly came to the realisation that I performed stronger in exercises that require picture memory rather than mathematical equations. 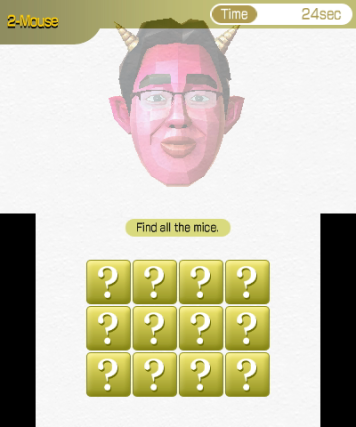 I decided to switch things up a bit and take my 3DS with me to work. This only happened twice in my experiment as trying to read out long sentences in the middle of a busy office floor garnered some not-so-welcome attention. My colleagues huddled around, I showed off my skills in Devilish Mice to only finish up on the lower level. Time to stick to my previous plan of stretching my brain in the comfort of my own home, with only my placid feline friend to distract me.

Devilish Reading (which I attempted to do at my desk) was also up there as one of my favourites. You read out loud a passage of text and are then required to write the underlined words at the end. Staying at home to do this exercise was my only option and I was happy with that, as you have to speak quite loudly for it to pick your voice up. I went back to this exercise a lot over the course of the experiment and thoroughly enjoyed it. 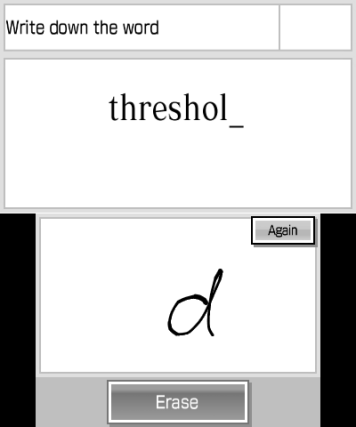 But my free time was becoming less readily available. By the end of the week, Devilish Shapes was another mini-game that I found myself getting frustrated with, as it was ‘a case of just remembering’ simple shapes. Much like Devilish Calculation, it shows a line of shapes and you have to guess the previous one to the shape shown on the top screen. You are then required to remember more shapes when you reach a higher level. I found myself getting wound up mostly because the last time I got annoyed with simple shapes, I was 5 years old and in a Dentist’s waiting room.

Devilish Blocks and Devilish Cups are some of the last exercises you’ll get your hands on, I regrettably never got round to unlocking Devilish Sound. Blocks really tested me, as I had to remember the positioning of flashing blocks from the top screen and then tap on a blank grid on the touch screen. An increasing number of blocks – coupled with more rounds to remember – made this exercise one of the hardest out of the bunch. And certainly puts my theory of excelling at visual-based exercises on its head. I stayed at a comfortable level throughout my time playing Blocks as, much like Shapes, I could feel my blood boil at struggling to get to grips with such an easy concept. Cups, on the other hand, was much more accessible and, although relatively stress-free, still posed a difficult challenge. Numbered balls are under some cups that shift randomly around and it’s your job to reveal them in order. As simple as it sounds, you can always count on getting rewarded with faster cups and more balls – which I did. I used Devilish Cups to regain confidence when the other exercises dragged me down, especially when I was ‘losing’ at the exercises I wholeheartedly thought I had nailed.

The seven days were up quickly and overall, I stuck to my schedule of training in the evenings – the fewer distractions the more effectively I performed. I learned a surprising amount of things during my experience with Dr. Kawashima’s Devilish Brain Training, but none of it academic. With the Dr’s frequent seminars that touched on how, in this modern day, we are constantly stuck to our screens, I found myself freeing up more time to relax but also to concentrate. Not only did the exercises begin to help me stay focused at work, they also aided me in collecting my thoughts and resting easier. Devilish Brain Training is by far much tougher than the original and I only got my brain age to around the 36-year mark after re-taking the initial test. It has improved though from 70 and with more training I can envisage getting it closer to my actual age. But for now, I’m going to book a Dentist appointment in the hope that they have a new shape puzzle. I know I could definitely do better thanks to Devilish Brain Training.

Dr Kawashima’s Devilish Brain Training is available to download from the Nintendo 3DS eShop for £24.99.